The Fascinating History of the Lykoi Cat

.
The Lykoi, also referred to as the ‘werewolf cat’, is a natural mutation from a domestic short-haired cat. Lykoi has a similar appearance of a werewolf, hence its nickname. The name Lykoi Cat roughly means Wolf Cat in Greek.This natural mutation is said to have occurred in domestic cats for the past two decades.

The 5 founding cats came from two unrelated litters. The first litter was presented by Mrs. Thomas in Virginia, as a possible Sphynx mutation, but this was later disproved through DNA testing. This litter was born in July 2010 and the mother was a normal black domestic shorthair cat.

Dr. Leslie Lyons carried out the DNA test on the kittens to confirm that they were not Sphynx nor Devon. Mrs. Thomas gave the litter to Dr. Johnny Gobble as she did not have the time or resources to carry out the genetic and health tests herself. Dr. Gobble then received news of a second litter that has similarities to the first litter in Tennessee. The litter was born on September 2010, and was clear that this set of siblings had the same gene as the first litter.

Numerous tests were carried out on the cats to determine whether they have any health problems or diseases that could have caused the mutation. It was discovered that the cats come from a natural mutation and the Lykoi breeding program began. In September 2011, the first ever Lykoi to Lykoi breeding cat was born.

In 2012, the Lykoi cat was presented to The International Cat Association (TICA) registry and was passed to a ‘registration only’ status by unanimous consent. The Lykoi cat is now recognised as a TICA Championship Breed and can compete as of May 2017. 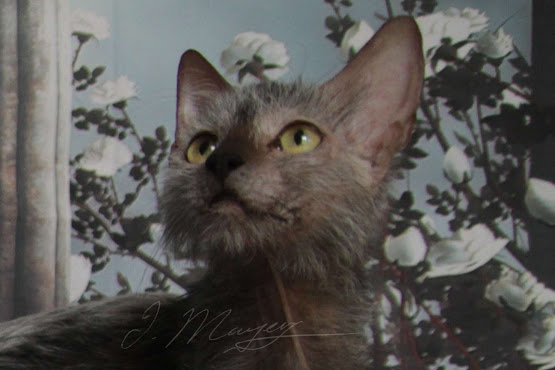